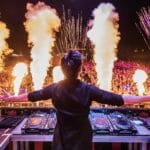 KSHMR, known offstage as Niles Hollowell-Dhar, has finally released his debut album, Harmonica Andromeda. The 14-track LP is the producer’s first project since his 2017 EP, Materia.

Hollowell-Dhar’s journey through music has been an experience like no other. As one-half of the hip-hop duo The Cataracs, KSHMR got his first taste of international success in 2010 with “Like A G6,” which hit No. 1 twice on the Billboard Hot 100. In 2013, the producer infamously became responsible for one of the most popular bigroom house songs of all time when leaked contracts credited him as a co-writer and co-producer for DVBBS and Borgeous’ “Tsunami.” The news eventually led him to leave the ghost production circuit and start the KSHMR project in 2014.

Since then, he’s made his presence felt in dance music with monumental hits such as “Scare Me,” “My Best Life,” “JAMMU,” and “Secrets,” as well as through the recent launch of Dharma Studio and his Dreamz side project. KSHMR announced his debut LP in January and released two singles from the album, “The World We Left Behind” featuring KARRA and “Around The World” with NOUMENN in the lead-up to the album. KSHMR said of the undertaking,

“The creation of Harmonica Andromeda made me fall in love with music all over again–there’s a journey in every song. It’s the most creative music I’ve ever made and the most challenging, filled with sharp turns and surprises. I hope the world loves it as much as I do.”

Harmonica Andromeda dives into KSHMR’s deep-rooted Indian heritage, with the harmonica, guitar, and flute serving as the album’s core instrumental elements. In a recent tweet, KSHMR postulated that his latest body of work may be “one of the best electronic albums of all time.” Fans will have judge for themselves whether this is true or not, but regardless, they should, at a minimum, appreciate his implementation of multicultural facets and instrumentation within modern dance music, as visualized on Harmonica Andromeda.