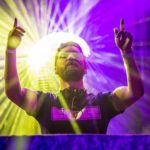 After outlining Lost‘s sonic stencil with a handful of pre-album singles—“Try,” “Homesick,” and “Hurt“—MitiS is now adding color to it with the release of his long-awaited sophomore LP.

Ophelia Records‘ third label LP, Lost intertwines pop-dance and melodic bass across a dozen inclusions. MitiS, real name is Joseph Torre, grew up in Pennsylvania and spent much of his childhood training as a classical pianist. As long-time MitiS listeners know and know well, the Ophelia Records asset looks to his early training as a musician for current production cues, using his prior experience as a springboard for present creativity. This is, of course, apparent throughout Lost, which opens with a humming intro, an acoustic guitar reverberating over the sweeter melodies.

In the context of MitiS’ longer-form endeavors, Lost follows October 2019’s Shattered EP, also released via Ophelia Records. It also more distantly succeeds his debut album, ‘Til the End, issued in March of 2018.