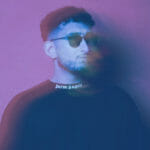 Talented up-and-comer NAZAAR just released his latest entrancing single “WITH U.” A vocal trap and bass gem that tells a deeply personal story of finding yourself and your purpose. Opening with a haunting dialogue between two lovers, NAZAAR builds the tension with heavy serrating synths and a breath-taking drop. The sultry, distorted vocals serve to contrast the light and dark elements of this multi-faceted production. NAZAAR bridges the gap between a hopeful message and an ominous instrumental. Self-reflective and pensive, the song was written while at a low point in his life and embodies the feeling of surrender to being lost and what it feels like to come out on the other side.