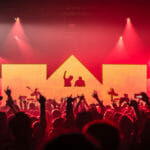 NERO sent shockwaves within the dance music world when they broke a two-year silence with an unofficial edit of Daft Punk‘s “Emotion,” as well as Tame Impala‘s “Disciples,” both released via blockchain-fueled music streaming platform, Audius. In their latest offering, the legendary UK group has released its bootleg of Frankie Goes to Hollywood’s 1983 hit, “Relax.”

The edit of the once-banned radio favorite features a variant of modern approaches to disco, nu wave, and electro while pointing to the trio’s formal transition from bass-oriented tracks to electro-disco oldies from the ’80s. The remix was first played at Albizzate Valley Festival in Italy in 2016, but was later widely received after being broadcast globally during Ultra Music Festival Japan two months thereafter.

This marks the third unofficial remix that NERO have released in March, with two more on the way, as indicated on social media. NERO also seemingly alluded to the potentiality for more unreleased music to soon come, gesturing to the 10-year anniversary of their groundbreaking debut album, forthcoming this summer, with the hashtag #WelomeRealityX.

Listen to NERO’s unofficial edit of “Relax” by Frankie Goes to Hollywood exclusively on Audius.