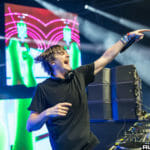 Dance music mainstay NGHTMRE has teamed up with up-and-comers Alexandar Smash for “Speak Easy,” arriving via Ultra Music exactly one year apart from Smash’s first release, “Omm.” In the time since, the Alexandar Smash outfit have quickly managed to make a name for themselves, and under the most unstable of circumstances at that.

“As soon as I heard the vocals I knew how it was going to sound. It’s rare when that happens but it’s the best feeling. We spent months tweaking/adding final touches and I’m extremely proud of how it ended up sounding!”

It’s safe to assume that after a sonic powerhouse such as “Speak Easy,” fans just might be able to reasonably expect more from this trio in the future. Until then, stream below.