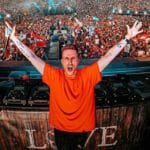 Nicky Romero channels a new kind of energy with not so foreign origins in his latest release “Acid Is My DNA.” Departing from the progressive house sound that popularized him as a household name, Romero forays into sonic territory that harkens to his 2012 style, notably in “Generation 303.”

Although in recent times, Romero’s music has historically leaned on a combination of vocals and upbeat progressive drops that give his tracks the adaptability of both radio play and live performances, “Acid Is My DNA” has an entirely different appeal—driven by its ominous build, vintage synth usage, and hectic energy.

It remains to be seen whether “Acid Is My DNA” is indicative of a new direction for Romero, or simply a one-off release.

“Acid Is My DNA” is out now via Romero’s own Protocol Recordings. Stream below.