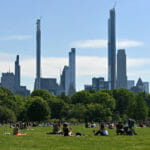 Clubs are reopening. Festival lineups are dropping. Nature is healing.

As cities across the US continue loosening COVID-19 restrictions, public attention is fixed on nightlife hotspots in anticipation of what industry insiders believe could be an unprecedented boom in the arts and entertainment spaces. In short, all eyes are on New York, and the city is planning a one-time mega-concert event to celebrate the collective’s Great Reunion.

Mayor Bill de Blasio has tasked 89-year-old music industry deity and Brooklyn-native, Clive Davis, with producing a large-scale, multi-booking performance that’s currently dubbed “The Official NYC Homecoming Concert in Central Park,” tentatively set for August 21. Reflecting the city’s resilient bounce back from a dormant stasis in 2020, Davis is set to be gathering the pieces for a three-hour blockbuster event for 60,000 attendees and a worldwide television audience, including performances from reportedly close to ten “iconic stars.”

While a lineup has yet to be confirmed, let Davis’ Rolodex speak for itself. Over his storied production career that spans more than five decades, Davis has built an untouchable legacy working with the likes of Aerosmith, Santana, Alicia Keys, Whitney Houston, and more. Furthermore, a broadcast partner has yet to be named, though, recovering events giant Live Nation—that’s also expecting a superlative summer of shows across the US—is reportedly set to produce the Central Park mega-concert.

The culmination of the city’s “Homecoming Week,” the concert is set to take place on Central Park’s Great Lawn, an NYC landmark for some of New York’s most notable outdoor concerts over the years. As millions of vaccines continue to be distributed across the US, there’s hope that the summer of 2021 may be one of our most memorable summers in recent history.