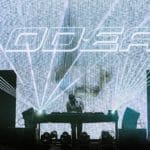 Having just circuited his 28th orbit around the sun, ODEA found it only fitting to commemorate his birthday by turning in the second of his two heavily anticipated IDs from his charged up Night Mode stream for Insomniac. After cracking open the doors to his very own imprint NITEFALL Records at the end of March with “Voices,” ODEA is continuing to write out his newly formed label’s opening story on its sophomore excursion, “Dimensions.”

Just like its NITEFALL Records predecessor, “Dimensions” puts forth the unfathomable savvy that ODEA has documented in just a handful of years and continues to swell his production scope. While dicing up a little more of a thunderous, gritty halo than “Voices,” ODEAS’s latest meets trap and bass music at a middle ground, and now that it’s earned its livestream creds, its live, in-person glory is pending realization at a proper festival structure.