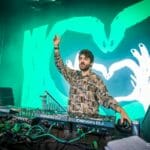 Oliver Heldens produced a generous yield of fresh dance cuts over the past year, many of which took on the form of triumphant collaborations. Now, the Dutch DJ has dispatched yet another successful joint effort, “Deja Vu,” featuring esteemed dance music vocalist, and Gari Safari founder, Anabel Englund. Hailing from Southern California, Englund has previously paired her talents with the likes of Hot Natured and MK.

The light-hearted “Deja Vu” delivers a groovy and exceptionally soulful house track. Dispatched via OH2 Records, the collaborative work is available to stream everywhere. Take a listen below.