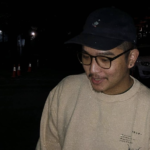 When “Beat Like This” departed the ID vault at the beginning of February, Dancing Astronaut didn’t hesitate to cite OOTORO as a constituent of a select class of artists maintaining house music’s novelty. Stepping out on his own following his Bleu Clair pair-up, OOTORO is headed to Matroda’s Terminal Underground to make his grand EP debut with Warehouse.

OOTORO assuredly didn’t struggle when assigning an apt headline to the EP, with both its title track as well as “Hit Em” serving as tickets to a lightless, late-night venue. Arriving as two of the three productions currently lined up on OOTORO’s ongoing April file, the double-sided spread of broiling tech house would entice anyone not already chomping at the bit to get back to a live setting to yearn for it all the same.