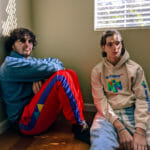 Following the success of their former title head NOKO, collaborators Jack Koplin and Noah Arin recently debuted the Origami Human project with “I Still Love You.” Their first single under the NOKO banner was well-received by existing fans and tastemakers alike, and included early looks on Spotify’s Friday Cratediggers and Indie Dancefloor playlists, priming the Origami Human undertaking for success across follow-up releases to come. This, of course, was only fitting for the former NOKO constituents, who had amassed millions of global streams and could be found atop the Hype Machine charts on multiple occasions during their activity under the NOKO name.

That being said, all eyes were on the Los Angeles-based duo as it unveiled its first follow-up single “Buried,” a second coming born from the evanescent moments of reflection during a long year in quarantine. The track features strong lead synths, melodic harmonies, and heartfelt vocal chops that will, quite literally, provide the soundtrack to brighten anyone’s day.

Origami Human emerged from the necessity to create and keep busy during a pandemic, causing the two producers to write a song a day for close to a whole year. With new inspiration and endless resulting songs in the vault, this is only the cusp of what’s to come from the project.