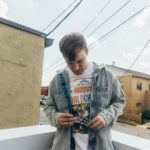 Paraleven has shared an ambient new track “Lucid” featuring Nathan Ball. A harmonious string section builds the track as Ball dances over its ambiance, humming synths fluttering through the breaks. Ball’s higher-pitched vocals create a sweet contrast to the cut’s deeper instrumentals, adding to its “Lucid” feel. Along with the new single, Paraleven shared the news that he changed labels, moving from This Never Happened to RÜFÜS DU SOL‘s Rose Avenue Records:

“I spent the entirety of my 20’s learning how to make electronic music and the ins and outs of the music industry. I told myself I wanted to be one of the greats—and to get the tap from both Lane 8 and RÜFÜS has merely validated what I have believed about myself for so long. I can’t thank Lane 8 enough for teaching me so much in such a short period of time. He was a class act and a brilliant producer. My time with This Never Happened and the fans that followed have been nothing short of amazing. But now I embark on a new journey and I could not be more excited to be a part of the Rose roster. Shoutout to all of you who have been patient with me. I have so much more music coming soon!”

“Lucid” arrives as Paraleven’s first original single since his 2019 Soloma EP. Last year, he sat down with Dancing Astronaut to talk about touring with Lane 8 and how he found his sound. The producer recently contributed to a remix of Lastling‘s “Out of Touch” and also found himself on Lane 8’s Brightest Lights remix package.