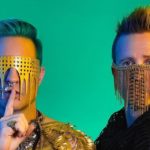 Pendulum drummer and Destroid member KJ Sawka ventures into uncharted territory with the official debut of his new project, The Private Language. The first taste of the duo group, comprised of Sawka and collaborator Blake Lewis, brings forth their remix of BT and Iraina Mancini’s “The War.”

In the works for over a year, the band combines the forces of both musicians for a “dreamy landscape saturated with organic percussion, indie guitars, and lush vocal melodies.” The Private Language’s first release arrives packaged on a four-track remix EP of the 2020 released single alongside remixes from Wayfloe, Tony Awake, and Johnny Frizz. Incorporating dewy instrumentation spotlighted by crisp percussion and ruminative guitar, Sawka and Lewis show off clean production and magnetic drive as they transform the genre-morphing original into a lively vocal-centric drum ‘n’ bass heater.

Stream The Private Language remix of “The War” below.