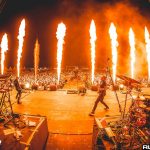 After rejoining the electronic world in 2020 following a 10-year hiatus during which the drum ‘n’ bass purveyors’ absence was acutely felt, Pendulum are furthering their re-entry to the dance domain with Elemental, their first body of work since 2011’s IMMERSION. Slated to release on June 17, the EP will include the three singles that previously soundtracked their comeback, “Driver,” “Nothing For Free,” and “Come Alive.” Elemental will also feature a fourth and final tracklisting, “Louder Than Words” with Hybrid Minds, which was introduced during Pendulum’s set at Spitbank Fort.

The Australian luminaries’ latest outputs have been nothing short of what fans of the triple Platinum-wielding band would expect, what with rock-inspired vocals, percussive synthwork, and generally jaw-dropping production. Pendulum are back not only with a vengeance, but also with what feels like the birth of a new era of drum ‘n’ bass.

‘Elemental’ will include “Louder Than Words” with @HybridMindsDNB

The post Pendulum to release first body of work in more than a decade appeared first on Dancing Astronaut.