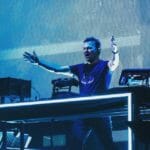 Pete Tong has returned with a new collaboration EP that witnesses him team up with the likes of Jules Buckley, Elderbrook, The Heritage Orchestra, Franky Wah, Tale of Us, ARTBAT, and more for reinterpretations of Ibiza classics. Pete Tong + Friends: Ibiza Classics collaboration sees the English force resuming his Classics format alongside conductor Jules Buckley and The Heritage Orchestra. Tracks such as “Time” bring the talents of Tong, Buckley, and Tale of Us together for a reimagining of Hans Zimmer‘s “Time” from the Inception soundtrack, alongside a compact offering of other modernized spins. Speaking on the release, Tong said in a statement,

“Pete Tong + Friends takes the Ibiza Classics story to the next level. It’s been so inspiring collaborating with some of my favorite artists, DJs and producers on eight fresh new interpretations of these legendary tunes and a brand new original song with Kölsch & Elderbrook. I can’t wait to start performing them live at our shows.”

In addition to the release of Pete Tong + Friends: Ibiza Classics, Tong and The Heritage Orchestra have announced they will be hitting the road in 2022 for an arena tour that will see them taking the stage in Brighton, Nottingham, Manchester, and two shows at London’s O2 Arena. The shows will kick off in Brighton on November 24, and wrap up on December 2 and 3 at O2 Arena. Last year, Tong and The Heritage Orchestra performed at the O2 Arena for one night only as part of a livestream event.

The upcoming dates coincide with what will mark the sixth anniversary of Tong’s collaboration with The Heritage Orchestra, with the producer teaming up with the band to create live renditions of rave, house, and techno classics.