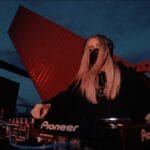 Poni is expanding the ranks of Sable Valley‘s roster with her igniting rework of Deadcrow‘s “Fallout.” The stimulating new remix comes after the label’s Audius-hosted remix competition in late April, where RL Grime named Altare as the winner with a remix of REMNANT.exe‘s track “Singularity.”

Poni’s energetic, well-fueled rework of “Fallout” hauls in inspiration from multiple electronic sub-genres of as the Canadian producer combines house, trap, and mid-tempo stylings while maintaining the acidic rush of the original. Sable Valley’s latest two offerings point toward a promising direction of the imprint, and while the label has yet to reveal the last winning revision of Deadcrow‘s “THERA,” in the meantime, fans can devour a tasty new remix from Poni below.

The post Poni is the latest to join Sable Valley’s roster with engulfing remix of Deadcrow’s ‘Fallout’ appeared first on Dancing Astronaut.