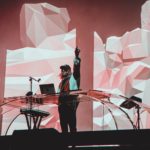 24 hours shy of the one-year commemoration of Nurture‘s existence being publicly disclosed, Porter Robinson is picking up the rollout for his now-finalized sophomore album with its presently most sought-after opus. Initiated as the conclusion to his one-of-a-kind Secret Sky grand finale, “Look At the Sky” steps into center stage nearly nine months after its maiden voyage to sit beside “Get Your Wish,” “Something Comforting,” and “Mirror” on the soon-to-be realized Nurture tracklist. The 14-track album will formally land on April 23 along with two additional singles, Robinson announced in time with “Look At the Sky’s” release.

It wouldn’t be any stretch of the imagination to think that the tens of thousands of fans sitting in front of their computers collectively froze as Robinson slowly spelled out “one more song, it’s a new one” on the projector screen directly behind him as the curtains began to draw on his daylong virtual emprise. For a fourth consecutive time, Porter Robinson capitalizes on the use of his own handmade vocals through “Look At The Sky,” amplifying the one-man show chronicle behind Nurture, validating its deserved placement on Dancing Astronaut‘s most-anticipated IDs of 2021 through its optimistic lyricism, and matching the first-string production to the LP’s prior trinity of showpieces.

Stream the long-awaited “Look At the Sky” in its entirety below.