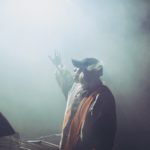 With every one of Nurture‘s visual components, Porter Robinson continues to eclipse his own imagination in bringing his 14-track sophomore album, now scheduled for April 23, into reality. Exactly two weeks after “Look at the Sky” became the album’s fourth single, Porter Robinson is now attaching an introspective video in an effort to expose all of the emotion bottled inside the Secret Sky closing number.

Following his self-directed “Mirror” masterwork, the new video for “Look at the Sky” secures the backing of Samuel Burgess-Johnson as Robinson places himself in an all-but-desolate setting, surrounded by a group of ghost-like figures to send the message that his work wouldn’t be what it is today without others that have come before him. He shared a detailed explanation into the exact meaning behind the video, stating,

“Sometimes when making music or art, we can think of ourselves as working alone. But that isn’t ever really the case — if I think about it, if I was raised in total isolation without exposure to culture, I would never have come up with any of the concepts of harmony, rhythm. None of us alone could have come up with the idea of twelve notes in a scale, the idea of chords, the idea of melody, the concept of a ‘chorus’ or ‘verse’ or ‘drum’ — much less would I be able to conceptualize and build an instrument or computer and all of its components. Everything we create is a collaboration with millions of strangers. And by creating and sharing our ideas, we’re afforded the gift of being able to contribute to this legacy. I think of the story of human creativity as this beautiful tapestry that each of us is given the very very brief opportunity to sew our own patch onto. The “Look at the Sky” video is about the beauty I find in this cycle. whereas the meaning of the song is more directly about the value of hope and resilience in the face of despair. But with the video, I wanted to extend the idea of ‘being alive next year’ from being literal into being a metaphor about the things we can contribute to this world that will outlast us.”

Watch the “Look at the Sky” video in its entirety below, and look for Robinson’s Nurture LP to land in full via Mom + Pop Music this spring.