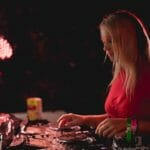 Axwell is no stranger to placing deserving, burgeoning producers on house music’s center stage, and he’s now welcoming in a fresh name to Axtone’s perpetually thriving lineup of talent, Ali Story. Not only is “Smile” a meaningful milestone for Axtone as Story becomes the first woman to stand unaccompanied on an original through the famed Swedish imprint, but it’s an even more momentous occasion for Story herself as she hands in the debut single of her career.

Simply put, “Smile” is a becoming headline for the dawn of Story’s newest chapter, considering it’s what a sizable percentage of the world’s population can’t wipe off their face as the pandemic’s lockdowns begin to wane away. Classically trained in music while growing up in the heart of Northern Ireland, Ali Story is the epitome of a one-woman show, single-handedly supplying all creative facets—from the vocals to the production itself—of the piano house treasure that is “Smile.” Story effortlessly flashes the mastery of a longtime veteran, despite having only credit in 2020 on Toolroom Records’ sophomore House Party installation. Story shared a message to emphasize her unwavering appreciation for the label boss and the Axtone team for giving her this break so early on in her tenure, stating,

“As an incredibly new artist to the industry, I couldn’t be more excited and thankful to Axtone for giving me the opportunity to release my first ever single. The support from the team has been phenomenal, but above all, it’s the genuine and sincere passion for music that shines through. Nothing but great resolve and determination to spread their belief and excitement for new artists and everything they represent. An incredible label and team!”

“Smile” will formally release on June 4 via Axtone, but can be streamed in full one day early, only on Dancing Astronaut.