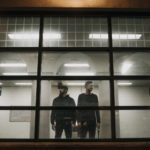 The rapid ascent of Yotto‘s Odd One Out imprint has garnered a consistent ranking of premiere electronic installments over its lush one-and-half year lifespan, to the surprise of none. For Brooklyn duo Anden, the act of ushering in the label’s first release of the year is an equally all-welcoming testament to their sophisticated growth and forthcoming reign.

Previously recruited for compilation Odd Ones, Vol. 1, Anden return to follow up their 2020 Odd One Out inclusion, “Vertigo,” with an immaculate EP, Rewind. Exercising a deftness in production touch, the genre-revolving pair hone in on melodic house and techno territories as they delineate separate concepts in the two-track package.

Machining a meticulous factory of sonic parts comprised of tingling layers, veering synths, and rippling bass lines, Anden fashion both subtle restraint and vivid impact in the titular “Rewind.” Encased by steady vocals, the track, also featured as the set opener for Yotto’s Insomniac livestream, deploys production elements in a nimble climb and descent of hills and valleys. Counterpart “Breathe” takes an alternative route in its embracement of breakbeats and darker undercurrents, juxtaposing gossamer embellishing against cerebral progressions in an eccentric marriage of harmonic instrumentation and analogue output. On the subsequent cuts, Anden explains,

“I remember when we wrote the original demo for ‘Breathe’ (starting back in 2018), and it was so unlike anything we’d ever produced…We didn’t really know what to do with it—this breakbeat to 4×4 to breakbeat arrangement was just ‘out there.’ In the end, it ended up balancing ‘Rewind’ as a thought-provoking B-side, and we’re happy for these records to have found a home on Odd One Out.”

Rewind will be available January 14 on Odd One Out. Pre-save here.