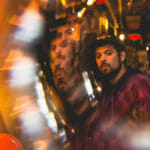 Three years after his last album, future funk favorite Flamingosis finally has a forthcoming follow up. To date, Flamingosis’ music has been primarily sample-based, but his upcoming studio album marks a partial switch towards live instrumentation. “Cosmic Feeling” is the third single giving fans a taste of the new production style following “Wild Summer” and “Daymaker.”

Accompanying the new single is an ’80s-inspired animated music video, offering a visual companion as smooth as the instrumental. In addition to the live studio musicians, Flamingosis samples the 1979 classic “If You Want It” by Niteflyte to give the track a warm nostalgic feel. Dancing Astronaut caught up with Flamingosis to chat about his upcoming record, the switch away from sample-focused production, and his new single.

Your upcoming album will be your first full record since 2018. Why did you decide now is time for another album?

“Flamingosis: I think now is the right time to put a record out since I spent a good amount of time on it and everything feels like it’s in the right place. Also it’s almost spring time, and it’s always a good time to release music whenever the weather starts to get better.”

Your new music partially shifts away from sample-based production, moving towards live instrumentation, what inspired the change?

“Flamingosis: In this particular project, I decided to incorporate both live instrumentation recordings as well as sample based music and merge it into one cohesive piece. Wanted to try something a little different. I think fans will like the new instrumentation incorporated, along with the familiarity of the soulful samples that I like to flip.”

You worked with an impressive cast of live instrumentalists on “Cosmic Feeling,” what’s your collaboration style like?

“Flamingosis: It was really fun! Have to shout out Borahm Lee, Hunter Roberts, Jeff Franca & Mike Tallman who all helped on the track. We worked on it together out in Colorado. I kind of directed them on what I wanted, which was playing a reinterpretation of the band Niteflyte’s song “If You Want It”. From there I took the band recordings and flipped them how I normally flip samples. I then incorporated the chorus from the original sample, along with the live band recording, and from there “Cosmic Feeling” was born!”

What inspired the ’80s aesthetic of the “Cosmic Feeling” video?

“Flamingosis: I guess since most of my music takes samples from the ’70s and ’80s, it seemed only right to go with an aesthetic that’s inspired by those decades too. I wanted to incorporate everything that fits into the Flamingosis world such as anime, flamingos, frisbee players, the beach, the ’70s/’80s retro style, etc. Tandem Media were the ones who brought the vision to life with the animation, and it really came out fantastic.”

“Flamingosis: The list can go on forever for musical artists, but J Dilla, Madlib, Flying Lotus, Daft Punk, Luke Vibert, Sade, Knxwledge, Ohbliv, The Avalanches, Patrice Rushen and Letherette have all really inspired me over the years to name a few. They all have a dreamy, clever and soulful feeling to their music and that made me want to make my own music.

My parents have really inspired me too. My dad left school for a while to pursue a career in Freestyle Frisbee and he ended up becoming a 5-time World Champion in that event. My mom was a dog trainer at the Seeing Eye, which is a place that gives guide dogs to blind people. She later ran her own dog walking/pet sitting operation. Seeing my parents work so hard and achieve these things in their life made me think, “hey, if they were able to make these things happen for them, then I can achieve great things in music too. As long as I’m willing to work for it!” They were definitely great role models for me and I don’t think I turned out too bad lol.”