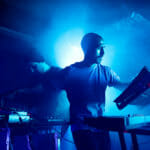 Electronic music is often defined by its ability to fill a dance floor with dripping synths and better yet, get those hands in the air, but at its core, the genre is nothing more than an updated toolbox for artists to mold their musical visions into sonic realities.

Case in point are the vivid and rising talents of Jaffna, whose latest single approaches the electronic music easel not with the boisterous intent of Tomorrowland‘s main stage, but instead to convey the organic ether of the city that inspired it, “Oslo.”

“Oslo” hits like a breath of fresh air, inviting listeners to follow its fluttering melody and driving percussion out of the club and into the region’s whimsical fjords. Jaffna’s fine studio-touch sews a beautifully organic palette of sound, but what really drives the duo’s latest single home is the space created in the mix between these elements.

“Oslo” is officially out on Enchanté Records on June 23, but can be streamed exclusively through Dancing Astronaut below. For more of the Paris-based duo, checkout their recent single “Headlines,” and look out for their debut LP, set to release this October.