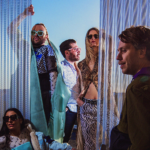 The sounds of summer are on their way, as French producer Joris Delacroix cracks open a cold one with his newest carefree single, “Early Hours.”

The new release sees Delacroix join creative forces with the vocal talents of the Anjuna-approved Run Rivers, whose dulcet tones set the stage for the deep, soothing embrace of the veteran producer’s kushy and percolating triplet melodies. “Early Hours” is pleasant as can be, but what makes the single such a memorable release is simply how it presents itself. Where most dance music strives to be as expansive and monstrous as possible, “Early Hours” is tangible and in your face; a finely cut gem that’s just an arm’s length away. While this approach may come off as a deviating from dace music norms, it’s been a defining element in the storied career of Joris Delacroix.

Listen to an exclusive digital premiere of Joris Delacroix’s “Early Hours” below. Fans of the track will find it out on SmallFishBigSea on Friday, May 7, with pre-orders and saves available here.