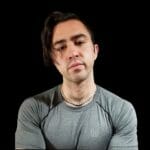 In 2020, Swole Sauce struck a match with his independent debut, “Colors.” With each successive single, the Queens-born experimentalist has thrown gasoline on the fire, and as “I Can Feel” further fans the flames, you can rest assured that Swole Sauce is still only just heating up.

After closing out the past year with a bass house-influenced spin on Kiani Alexandra’s “All Talk,” the New York native threw open the doors to another 365-day stretch of new music with his take on Martyska and Iva Rii’s “Alive.” After two consecutive remixes, it’s high time for another Swole Sauce original, and that’s precisely what his following is getting.

True to the early tradition that Swole Sauce instilled with “Colors,” listeners’ jaws will expectedly be on the floor by the time that the final second in “I Can Feel’s” runtime ticks down. The Trap N Chill-disseminated number euphorically intertwines elements of future bass and trap in a nearly three-minute rush that evokes RL Grime as it simultaneously puts Swole Sauce’s own sensibilities on full display. The arresting new showing arrives via Trap N Chill on March 25, but can be streamed in full below one day early, only on Dancing Astronaut.

Read Dancing Astronaut‘s Q&A with Swole Sauce here, and stop by Trap N Chill’s SoundCloud to stream “I Can Feel” upon its March 25 release.

The post Premiere: Swole Sauce stuns with first original of 2021, ‘I Can Feel’ appeared first on Dancing Astronaut.