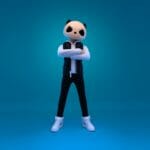 White Panda is back.

And for those that thought the mashup was a dying art, the format is still alive and well in the hands of one of the genre’s most celebrated forces on his new LP—Nightcub. White Panda’s track-blurring dexterity has amassed him hundreds of millions of streams over the course of six previous studio albums. Netting six full-length LPs is a dizzying achievement in the EDM space, and moreover, to return for a seventh after a six-year gap feels like a lifetime in dance years. Perhaps that’s because in those six years, the territory White Panda once equivocally ruled all but disappeared as the major DSPs enacted tight regulations on copyright usage. Ahead of the project’s arrival, White Panda told Dancing Astronaut,

“Mashups have always been a bit of a black sheep to the music industry—revered by audiences but plagued with copyright debates. As streaming platforms started cracking down it became hard to justify the effort in making new mashups. There was just no way to host the albums in the main places fans would listen – so I pivoted into official remixes, doing tracks for ZAYN, Katy Perry, Panic! at the Disco, and Miley Cyrus. But I still had the itch, and it finally became too overwhelming to resist.

The timing of Nightcub isn’t a coincidence, either. As the hunger to return to form mounted, a year in lockdown gave White Panda the push he needed to dive back into familiar waters. Now, as dancefloors across the globe begin to reopen, a fresh, hour-long batch of tasty mashup work is here. Says White Panda,

“Quarantine was an ideal opportunity to refocus on my first love: a damn good mashup album. And after a year locked up inside—’Nightcub’ is what I have to show for it.”

The album pops and weaves through cuts that blend everything from Tiësto and Avicii to Nine Inch Nails and Dua Lipa, with Cardi B, George Michael, The Pointer Sisters, A$AP Rocky, Doja Cat, Galantis, Post Malone, ZEDD and so much more in between. From The Chainsmokers to Rage Against the Machine, White Panda’s latest has it all, and damn is it good to have him turning out mashups again.