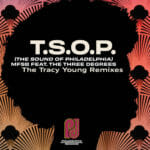 To celebrate 50 years, much of which have influenced the dance music space, PIR is premiering a stellar remix through Dancing Astronaut. Grammy-award winning DJ/producer Tracy Young puts her funky-fresh spin on one of the most iconic melodies in dance music from the imprint’s house band, MFSB. “T.S.O.P. (The Sound of Philadelphia)” featuring The Three Degrees is a Grammy-award winning track, and theme song for the legendary television show Soul Train, which ran from 1973 to 1975. Updated versions of the song were used as the show’s theme starting in 1987 until the show ended in 2006.

Young won the Grammy for Best Remixed Recording of Madonna‘s “I Rise,” in 2020, marking the first time that a female producer has ever been nominated and won the category. The production virtuoso has racked up 60 No. 1 US Billboard Dance Club Chart hits since 2000.

The remix is a funky house jam to its core. A strong percussion backbone glides alongside an unctuous baseline, eventually introducing those memorable “people all over the world” and “soul train” lyrics. The soulful guitar comes in for an absolutely groovy hook that screams disco house and a more than ideal representation of the iconic Philly soul sound.

“T.S.O.P. (The Sound of Philadelphia)” will formally release on March 19, but is available to stream in full one day early, only on Dancing Astronaut.