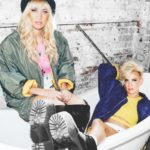 Proximity has teamed up with Montraa to release an art film for Nervo‘s single, “Horizon.” Featuring elegant dancers and an enthralling soundtrack, the film finds a couple dancing around one another and contorting their bodies, flashing lights moving around them. Director Viktorija Pashuta said in a press release,

“With ONE art film we tried to deliver a powerful message—that we all are given a ticket in life and despite all the challenges and obstacles we come across during this crazy ride—we should remember that we always have a choice how to live it.”

Omar Zabian, founder and CEO of Montraa, said in a press release,

“This project represents the energy of Hope, the power of Unity and the magic of Love. Even in the midst of a global pandemic, Music heals us, Art inspires us. It’s what the world needs now, and always.”