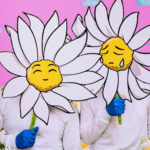 Last month, unidentified duo Pushing Daizies made their official public debut with the future bass inspired track “Want It To End” on Dim Mak Records. A groovy and emotive vocal anthem that shows off their unique sound, “Want It To End” blends both producers previous styles into an amalgamation of sounds that is both forward thinking and familiar. Shortly after they followed up with “Dreams,” bringing vocalist Kelsey Rey on board to deliver a slow and suy performance over the duo’s strange brew of future bass, bigroom, and lo-fi beats.

The post Pushing Daizies release ‘Dreams’ and ‘Want It To End’ on Dim Mak appeared first on Dancing Astronaut.