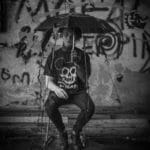 One of the most exhilarating new acts featured in Dancing Astronaut’s Artists to Watch in 2021, Qoiet, is ramping up the noise once again, this time with his latest single “saw BONES.” The multi-genre Hamburg-native producer earns his first solo release on Kayzo‘s label Welcome Records after debuting on the imprint with his commanding collaboration “Wait” alongside REAPER and Kayzo himself in August 2020.

“saw BONES” is Qoiet’s trademark blend of dubstep, death metal, trap, and post-hardcore, culminating in overwhelming bass designed to tear speakers apart, combined with the ferocity of the German producer’s petrifying vocals. The solo single is first release of the year for Qoiet and rightfully serves as a maximalist effort from the producer who is charging himself with pushing hybrid bass music forward. Hear “saw BONES” below.