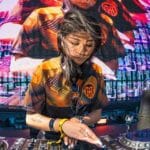 One of Dancing Astronaut’s most illustrious 2021 Artists to Watch Qrion has unveiled her second remix of the year, taking on electro-pop single “Odyssey” from pop singer-songwriter Flownn. Following her and KROY’s intoxicating rendition of Apashe‘s “Rain,” the Japanese icon offers fans another incredibly dynamic groove with her latest.

For her sophomore release of the year, Qrion dives into a piano house excursion. Touting her seasoned style, the track creeps in with an ethereal approach. Joining Flownn’s alluring vocals, the house purveyor creates an uptempo and excitable execution with lyricism that connects listeners worldwide.

Stream Qrion’s remix of “Odyssey” below.

Viral Sensation Juicy M teams Up with Drop the Cheese On House Smash, ...

San Pancho Creates Most Addictive Bassline of 2022 on ‘Pride’ on ...