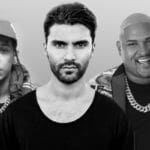 With an artist album on deck, the illustrious R3HAB links up with Brazilian hitmakers MC Kevin o Chris and LUCK MUZIK for “Deixa Se Envolver (Spring Love).” The new single builds on R3HAB’s pop-infused dance initiative by introducing a new sense of Brazilian funk flare, which together evoke the soft brush of the sea breeze as the summer sun sets– a welcome atmos for these chilling winter months.

Commenting on the release, R3HAB says,

“It is always a pleasure to connect with artists who are trailblazers in their genre. MC Kevin o Chris has proven to be an innovator in the Brazilian Funk world and it was a fun challenge to blend this into my style. Brazil has a special place in my heart and I hope the people of this beautiful country love this collaboration as much as we do.”

“Deixa Se Envolver (Spring Love)” seems to be the next step in R3HAB’s collaborative world tour, following releases alongside Denmark’s Lukas Graham as well as JP Cooper and Sigala, who reign from England. Accordingly, each release along the way has had a completely different stylistically approach, but R3HAB’s studio mastery and fine melodic touch have remained driving factors throughout.