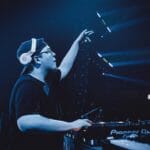 Thanks to Excision‘s inception of Subsidia Records, listeners have been able to more readily discover up-and-coming bass-focused producers than ever before. That said, Subsidia’s establishment is far from the first time that Excision has made it his mission to find new artists. One time in particular stands out—back in 2014, when Excision played a young Ray Volpe’s Barely Alive remix during one of his famed Shambhala sets. For Volpe, this was just the beginning. Fast forward seven years to 2021, when Volpe has released his most recent EP Mixed Feelings, all-encompassing and deeply entrenched emotional voyage that stretches across genres.

The six-track EP is introduced with the expansive, eight-bit track “Rebirth,” which paves the way for the melodic journey listeners are about to embark on. Setting forth into “Nosebleed,” the project makes way for a heavier bass excursion before fans are hit by the pleasantly abrasive “Tell Me.” The final section of the EP heads back into a more poignant, soulful sound, characterized in part by “Feeling This Way.” Each tracklisting features vocals from none other than Volpe, making the entire output all the more impressive.

Over the course of his career, fans have watched Ray Volpe grow from toying around on the remix end to collaborating with artists like Getter, Kayzo, and Wooli, to curating a passionate and well-honed production. Stream Mixed Feelings below.