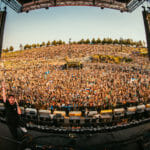 Ray Volpe’s live edit of “Core” comes just three months after the release of his debut Disciple Records EP, Rise Of The Volpetron, as well as his October future-bass single, “What You Need.” The bootleg amplifies the original range of meandrous basslines and battling horns as Volpe superimposes his face-melting dubstep sound over the unforgettable VOID classic. Hear the flip in action below.