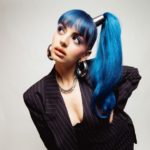 Going viral online was still a relatively new phenomenon when then 13-year-old Rebecca Black released her unforgettable debut, “Friday” back in 2011. The absurdly infectious amateur pop one-off launched Black into white-hot ephemeral fame at the time, racking up millions of plays and establishing the foundation of Black’s YouTube and recording career. Now, as a fully anointed child of the Internet with a Gold plaque to show for it, Black is a highly successful YouTuber and a fledging songwriter, and she’s celebrating her breakout single’s 10 year anniversary in style.

Super-charging “Friday” with a puckering hyperpop remix that pays endearing homage to its original counterpart, 100 Gecs‘ Dylan Brady, Dorian Electra, bounce deity Big Freedia, and 3OH!3 all pile on with Black for a rework perfectly fit for 2021. The souped new version of “Friday” comes with an equally enhanced new video to boot, juxtaposing the original video’s cheeky visuals against a sleeker, futuristic backdrop that’s just as electrified as the remix it accompanies.