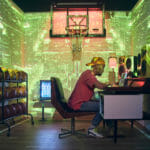 From a cell phone buzz to a sheep’s “baa” and eight other sounds in between, the Atlanta-hailing tastemaker, whose resume boasts work with Snoop Dogg, E-40, and Joyner Lucas, among others, can be found rising to Red Bull’s challenge below. Ensuing episodes in the second season of Red Bull Mystery Pack will enlist KVYREN, DRAMA, and Danny Wolf; stay tuned for more.