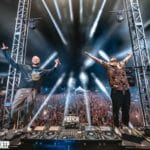 Dancefloors across the US are beginning to reopen, and currently Phoenix, Arizona is emerging as one of the country’s most in-demand hot spots for dance and electronic events happening this summer. Kicking off over Memorial Day Weekend with a two-night run by Fisher and Chris Lake, followed closely by a deadmau5: Unplugged billing and Tiësto‘s Back In Business. Phoenix is proving to be the place to be as the summer swelter heats up and Relentless Beats shares the rest of this summer’s highly anticipated bookings.

Relentless Beats’ summer concert series promises to host a stacked roster of shows, with Excision bringing a heavy dose of low-end over a two-night slot with Wooli, SVDDEN DEATH, Riot Ten, Sullivan King, Kompany, and more on June 18 and 19, as well as REZZ‘s debut AREZZONA event on July 3. What’s more—Zeds Dead‘s famed Deadbeats showcase will roll into town on July 10 with support from Rusko, Subtronics, LICK, and others, followed by Louis The Child‘s Euphoria Tour two weeks later with additional support from Jai Wolf, K Flay, and ilo ilo.

Best of all, Dancing Astronaut has partnered with Relentless Beats for two different ticket giveaways. Enter below for your chance to win tickets to either the Excision or AREZZONA shows, and the Deadbeats and Louis The Child dates. For more information on purchasing tickets, or to view the full lineups by show, click here.