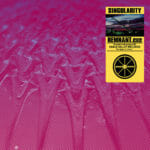 “Singularity” bears the next-level production and sounds of trap and bass of the Sable Valley institute. The New Mexico producer channels his inner decks devil as enigmatic bass elements clash with suspenseful melodic buildups and haunting breakdowns. The perplexing single ceaselessly discharges drone-like atomospheres as trance anthemic synths arrange in a cryptographic manner, decoding what could be the formidable soundtrack of a technology-controlled future.