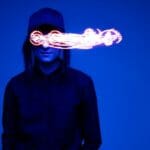 When REZZ first teased the release of Spiral earlier this year, fans were already desperate to get their hands on the record. Led by the single “Chemical Bond,” which saw the prolific producer team up with Deathpact, the first single made the statement that Spiral would deliver everything fans wanted and then some.

After a rollout punctuated by “Chemical Bond” and “Let Me In” featuring fkynsyd, REZZ’s third release sees her not only expand on the dark synths that launched her musical career, but also introduce a smoother overall approach to production. “Levitate,” for instance, differs from a regular REZZ track in that it features a slightly more soothing tone while maintaining the hypnotic power of REZZ’s regular tracks.

In February, REZZ will be embarking on a 15-date Spiral tour in support of her new album. The tour will kick off on February 4 in Vancouver and wrap up on May 14. See the full list of dates here.