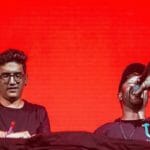 The saying goes that good things come in threes, and when it comes to Ophelia Records, one of Dancing Astronaut’s favorite labels is hailed for its ability to employ A-list unions. The label is now welcoming in a new face to its already marathon directory of talent, tapping Israeli duo RIOT for what feels like a somewhat overdue release entry. RIOT understandably had to go all out for their Ophelia Records unveiling, partnering up alongside Far Out—who returns on his first label original since his Beyond The Horizon EP exactly a year ago—and our second Supernovas inductee and label mainstay, RUNN.

Just from the “Waterfall” artwork alone that was shared alongside the single’s initial reveal, everyone was justifiably forecasting another three-headed Ophelia Records masterwork to be in the pipeline, and that’s exactly what it is. “Waterfall” embodies the heart of soul of why Ophelia Records is championed as a home for not just melodic dubstep, but forward-thinking bass music as a whole. RIOT take another step into melodic dubstep territory on their newest output, happily meeting their respective touch in the middle with Far Out’s ingenious sound—with a hard-hitting dubstep crest on the single’s opposite end—as RUNN’s invariably unfeigned vocals join in to grandly round “Waterfall” out and rebroadcasting the reason she’d been previously spotlighted in our singer-songwriter series.

The post RIOT, Far Out and RUNN trek through a ‘Waterfall’ of melodic dubstep grandeur on Ophelia Records appeared first on Dancing Astronaut.