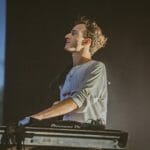 RL Grime didn’t really need to put anything other than those two words in his Instagram caption for there to be a collective understanding that the “Halloween IX” opening was about to be let loose in the coming week. In the maiden moments of the Sable Valley king’s ninth holiday treat, matched with an audiovisual component for the first time in his October series’ timeline, Grime planted the mix with a T-Pain-backed prologue that deiced just about everyone following along in r/trap’s livestream thread. Almost six months to the day later, the “Halloween IX” origin has now evolved into “Stinger,” with RL Grime—of course—attached, on top of an unexpected running mate in the form of a Dancing Astronaut Artist to Watch in 2021, ISOxo.

We didn’t specifically prioritize any of the tracks on the roll call of our most-anticipated releases stepping into the year, but no one would lose a second of sleep over us saying that “Stinger” took precedence, with ISOxo’s disclosed company just being the cherry on top. The new Sable Valley draftee joins two other now-uncovered holiday mix IDs from both REMNANT.exe and Deadcrow, and is somehow even more standing ovation-worthy in its fully realized state. No amount of time may ever pass to get used to “Halloween IX” not being eerily echoed just predating the snare-laden drop, but RL Grime and ISOxo certified the former’s brief account of their liaison, making for a gold-plated trophy of trap grandeur that would’ve circulated in just about every DJ set this summer had COVID-19 not stood in the way.