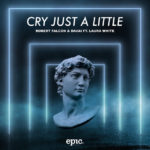 Up-and-coming Belgium producer Robert Falcon takes his spin on the Bingo Players classic “Cry (Just a Little)” with fellow producer Davai and the vocal stylings of Laura White. Now a decade old, The Bingo Players debut hit receives a fresh makeover that is familiar but distinctly updated. Gone are the melodic builds and progressive swirls, replaced with a heavier handed foundation that grinds and pulses underneath Laura White’s pitched down howls. While the original was bright and poppy, Falcon and co make things much more atmospheric and powerful — a deep house spin on one of EDM’s most iconic tracks – one that converted hundreds of thousands of new fans all those years ago. And it’s still just as contagious as it was in 2011.