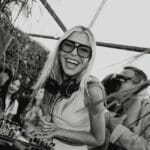 Sam Blacky knows how to craft a house tune, and she has done just that with her newest release “Paradise.” The track was born after Florida-based singer-songwriter Madeline Austin reached out to Blacky on social media. Austin sent Blacky her vocal demo after the latter called for female vocalists looking to collaborate, and from that moment on, they decided that they would work on the single together.

Austin’s sultry vocals complement to the smooth and markedly subtle house notes of “Paradise,” which seems almost to transport the listener there, thanks to the fusion of all of these different elements. Blacky discussed the single in an official release, sharing,

“‘Paradise’ is a more melodic track that I feel people can enjoy in different environments; listen to it while driving, use as a morning soundtrack after waking up, or dance to it in a club.

I wanted to make it more universal than just a club banger. Once again, I pulled inspiration from all the beautiful places I have been to, and ‘Paradise’ feels like summer in Ibiza or Mykonos. It’s the feeling of butterflies in your stomach, floating through the ocean with the wind on your face and a big carefree smile coming from within.”

“Paradise” is Blacky’s third release since her debut, “Too Late,” in February of 2021. The single is out now via Blacky’s own Stabby Records.