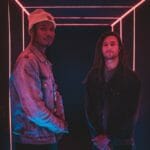 SAYMYNAME and Henry Fong are bringing the party right to your doorstep with the club-ready “Ragga Rave,” released via Ultra Records. The boundary-breaking cut is filled with convoluted rhythms and frenetic bassline action that first aired in Fong’s New Waves Vol. 1 mix in February 2020. In the time since, the long sought-after ID unsurprisingly surfaced in a heap of in-person and digital stints.

For a first-time tie-up, SAYMYNAME and Fong’s “Ragga Rave” designates itself a festival go-to for audiences to whom intense energy appeals. Stream “Ragga Rave” below.