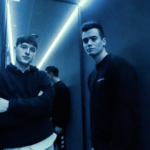 Seth Hills has repeatedly solidified a case to be one of house music’s most rose-colored names, and after a five-course release menu in 2020, the STMPD RCRDS standout is masterfully airing out his evolution as he enters the new year. Partnering up beside fellow Dutchman Vluarr as well as Lucas Ariel, Seth Hills is unmasking ID number six out of ten from Martin Garrix‘s appointment at Tomorrowland’s digital countdown to 2021.

Perfectly and riotously self-described by Seth Hills himself as having a “sick melody” during STMPD RCRDS’ guessing-game video for the artists behind the IDs in the forenamed set, “Calling Out” showcases the unbounded growth of Hills’ production range and a discernible step outside his habitually more high-octane tone. After discovering Vluarr’s clever trap direction whilst at home during quarantine, Hills instantaneously knew their sounds would gratifyingly intertwine, rounding in Lucas Ariel for vocal backing on a bass-drilled, three-headed house delicacy.