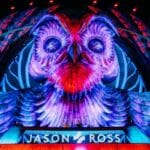 Seven days have come and gone in 2022 and Ophelia Records is already doing everything in its power to defend its newly crowned title of Dancing Astronaut‘s Label of the Year. Seven Lions and Jason Ross have connected more than a half-dozen times before—on “Higher Love,” “Ocean,” “The Sirens,” “Known You Before,” “Foolish Of Me,” and most recently the label supergroup union—and the Ophelia Records tandem decided to up formally bump that counter up to lucky number seven during EDC Las Vegas’ 25th anniversary celebration back in October. But before the clock would strike 2022, Jason Ross revealed that a “big” release had been rescheduled for the top of the new year, and while predicting See You Again‘s eponymous number was a surefire call, no one was anticipating that count would turn to eight through an unexpected two-part EP.

At the halfway point of Ross’ hour in control of EDC Las Vegas’ kineticFIELD, he grabbed the microphone to welcome a “special guest” onto the stage for the world debut of “See You Again” alongside Fiora, who has earned vocal credit on countless originals beside both producers. “See You Again” picks up exactly where “Foolish of Me” left off—if we’re not counting “Pantheon” for argument’s sake—in October 2020, expanding Seven Lions and Jason Ross’ collaborative lineage with nearly four-and-a-half minutes of unbridled melodic dubstep perfection, topped with Fiora’s burning vocals to complete a track that would’ve doubtlessly headlined our incoming most-anticipated IDs of 2022 feature. And while “See You Again” might be the more tempting cut from the duo’s doubleheader, the release’s latter end has seemingly flown somewhat under the ID radar since its suspected unveiling during Jason Ross’ Park ‘N Rave stream from exactly a year ago. “Orpheus” flips a complete 180 degrees from its EP counterpart, with the two cashing in on the routine hardstyle sections from their respective sets and breeding it into a pulsating original of their own, giving their See You Again EP a versatile edge on two distinctive production fronts.