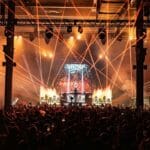 Seven Lions‘ music is already flawless while standing on its own, but the accompaniment of a string quartet takes those productions to an entirely different playing field. Those in attendance at either the Ophelia Records head’s Higher Love run at Red Rocks or Chronicles III at The Gorge Amphitheatre had the once-in-a-lifetime opportunity to see those worlds collide in person at two of the planet’s most breathtaking venues. Just days after Ophelia Records’ Pantheon tour came to a finale at Brooklyn’s Avant Gardner, Seven Lions turned that forenamed pairing into a streaming reality, reuniting with string quartet ATLYS for the first-ever orchestral project between the two by reimagining eight of his time-tested classics.

There was no original intention of Opus materializing, but when Seven Lions asked ATLYS to tag along to Colorado back in July, an overwhelmingly receptive response from the Red Rocks audience led to him feeling that the combination deserved to evolve into a tangible project. The perfectly named release sees some of Seven Lions’ greatest releases get broken down into their purest, most natural state, with “Only Now,” “Rush Over Me,” “The Blood,” “Dreamin’,” “What’s Done Is Done,” “First Time,” “Ocean,” and “Worlds Apart” all receiving an enchanted, string-led renditions at the hands of the all-female group as well as two composers—Ari Fisher and Andrew Vogt—who arranged the music from scratch. ATLYS shared a heartfelt message behind teaming up with Seven Lions and creating Opus, stating,

“When Seven Lions came to us just a mere 5 months ago to invite us to be a part of this acoustic instrumental project, we were completely humbled and starstruck. As ATLYS, we love experimenting with different genres and going where no string quartet has gone before. The EDM world was a musical soundscape that we had yet to explore, and we couldn’t wait to discover how to play dubstep and other EDM techniques on our classical instruments. We’ve performed over 1000 concerts around the world, but performing with Seven Lions at Red Rocks and Chronicles III at the Gorge, with thousands of fans singing along, will definitely remain a highlight for us for the rest of our lives. Working with the Ophelia team and Jeff has amazing. These songs are so well loved, they bring comfort and light to Jeff’s fans worldwide, and we’re so honored to have been the ensemble that brings them into the string realm, thanks to the help of our favorite world-class arrangers, Andrew Vogt and Ari Fisher.”

Stream all eight Opus renditions below.