This Women’s History Month we’ve witnessed a noticeable shift in the growing effort to include more women in electronic/dance music. The release of the UNDERPLAYED documentary stirred up some much needed conversation and the all-women digital festival lineups didn’t go unnoticed — but, there’s still a long way to go.

According to new research titled BE THE CHANGE: Women Making Music from MIDiA Research, TuneCore and Believe, women face various pressing issues in the music industry — and unfortunately, the most cited of them is sexual harassment. A startling 64% of participants in the study reported experiences of sexual harassment / objectification while working as songwriters, artists, producers and/or DJs.

Challenges facing women in the music industry are broken down into three glaring categories — Discrimination which includes sexual harassment, ageism and lower pay; Resources: which includes male dominated resources, getting representation, and lack of female-first resources; and finally, Confidence including lack of confidence, lack of female role models, and the fact labels are male dominated.

42% of creators want to see more impact, and sooner.

There are some reassuring findings as well, because women have felt more empowered and confident to speak up. 42% of creators want to see more impact and 35% of creators are hopeful for change to come from learning and shared experiences in the form of coaching and mentoring. 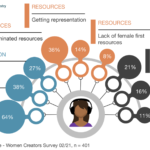 This article was first published on Your EDM. Source: Sexual Harassment Among Most-Cited Issues By Women In Music Industry

Leo Lauretti Will Have You “Movin” With Groovy New Single