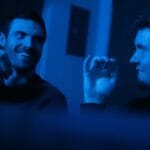 In 2019, Emmit Fenn and Shallou released their first ever collaboration entitled “All Your Days,” which has since become an instant crowd pleaser for both of their respective fan bases and gained over 35 million global streams to date. The one-off anthem propelled their careers forward as they continued on with solo releases and other collaborators—Shallou in releasing his debut album, Magical Thinking, in 2020 working with the likes of Daya, Ashe, and Petit Biscuit on their summer anthem “I Leave Again,” and Fenn with his 2021 debut album Far From Here and latest hit single “I’ll Find My Way To You” with UK superstar Elderbrook.

The two have remained close friends with both big fans of each other’s music, leading to an inevitable reconnect which sprouted up a sophomore collaboration, “Hollow.” The track encourages listeners to “follow the frozen world” through a winter wonderland-inspired melody, with harmonizing vocals and blissful electronics leading the way. Its echoing piano riffs and bright leads prove reminiscent of each artists’ respective production styles.

Fenn has taken his talents back to the live stage this fall, wrapping up some final dates on the Far From Here tour, while Shallou announced his upcoming EP, The Long Way Home, recently closing out his fall tour of the same name at a sold-out Webster Hall in NYC.