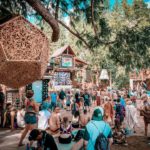 In December of 2020, Shambhala Music Festival officially announced its 2021 return, slated for late August 2021. Now, organizers have announced that the festival grounds will be open for camping this year, as well.

Beginning spring 2021, the Shambhala farm will be available for “farmily” camping trips, without the festival ruckus. Festival founder Jimmy Bundschuh expanded on the aim of the camping initiative, stating that “after social distancing and public health measures have been lifted,” the campgrounds could host workshops, retreats, family reunions, or even weddings. Bundschuh also specified that some services for RVs will be available.

The Salmo River Ranch is located in British Columbia, Canada, and typically plays host to 15,000 fans during Shambhala’s regularly scheduled July festival. The 2020 festival lineup featured the likes of REZZ, RL Grime, Tycho, Seven Lions, Richie Hawtin, G Jones, and Bob Moses. There is no official word yet on the 2021 Shambhala lineup. For more information on the festival, or on the upcoming campgrounds, visit Shambhala’s website.