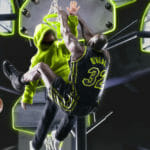 LA bass and trap phenom BLVD. has been not-so-quietly making a name for himself with a slew of gritty releases and a collab with Fatman Scoop. He returns with a larger than life collaborator on his latest release, bringing along NBA legend Shaquille O’Neal for a destructive new single “Posterize.” Shaq is no stranger to the heavier side of dance so his appearance sharing the credits with BLVD. one of the best doing it, is no surprise. A track literally designed for festival stages, “Posterize” might open subtly, but that’s the whole ruse. Before long the two turn things up into a furious barrage of kicks, wailing synths and a dubstep drop that might shake even the most hardened bass heads to their core. The hype track to end all hype tracks , you can bet you’ll hear “Posterize” in Shaq’s sets around the world this summer. As for BLVD.? He’s got a lot more madness cooking up in his lab.

The post Shaquille O’Neal teams up with BLVD. on ‘Posterize’ appeared first on Dancing Astronaut.